Into the deep end: What good crisis comms looks like

Sometimes we’re our own worst enemies. Ryan Lochte managed to prove that single-handedly earlier this week in Rio, when he combined bad boy behavior with tall tales and a very questionable approach of being forth-coming with the media.

For nearly three days, the Olympic news cycle was busy tracking a story that didn’t quite add up: Four US Olympic swimmers coming back from a party were robbed at gunpoint. Their demeanors weren’t typical of robbery victims, stories were inconsistent and thanks to the joys of social media, photos didn’t match up with the timeline they were sharing. Cracks in the stories quickly showed and the “Ryan Lochte as victim” story quickly turned into “Ryan Lochte – ugly American”. You could practically hear Ryan Lochte’s future endorsement dollars going down the drain.

From a crisis comms perspective, at this point, what you want do is stop the bleeding. While one might never mistake Ryan Lochte for a Rhodes scholar, he (or someone in his camp) made a smart decision by hiring a crisis comms expert to do damage control. Enter Matthew Hiltzik, a NY-based crisis comms expert, who was hired last night to course-correct his client, who was being creatively named in some parts as the “Lochte Mess Monster”.

Instead of further dwelling on questionable behavior, I want to highlight crisis comms done well. While it’s too soon to tell whether or not Ryan Lochte can be saved from himself, Rio authorities and the court of public opinion, the public apology he posted on his Instagram account this morning (which, one can absolutely bet was written by the aforementioned Mr. Hiltzik) is a masterclass in PR mea culpa. See for yourself: 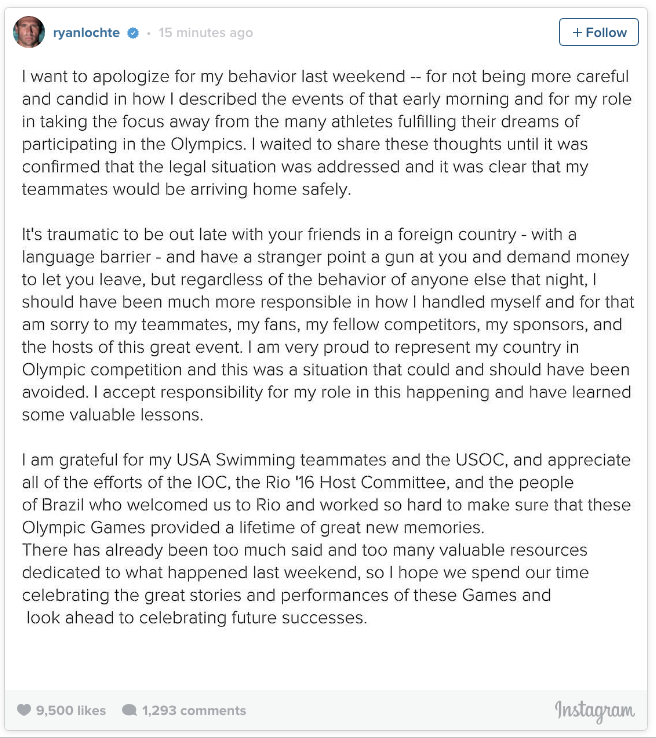 There are five key reasons this public apology works:

To mix sports metaphors, if Ryan Lochte is able to stick the landing on the above five points in any and all media interaction he has in the next weeks and months, he might be able to put this behind him.

(Update, August 22: It’s worth noting that the above piece of communication might have been all for naught. Instead of letting the Instagram communications speak for itself, Ryan Lochte took to the airwaves (the Today show and Brazil TV) to plead his case, which didn’t appear to help his cause. Instead, he came across in an unconvincing light to the point that two of his key sponsors, Speedo and Ralph Lauren have parted ways with Ryan. Crisis communications can help in times of peril, but of course one has to actually take the advice they’re given.)

What do you think? Leave your comments below.